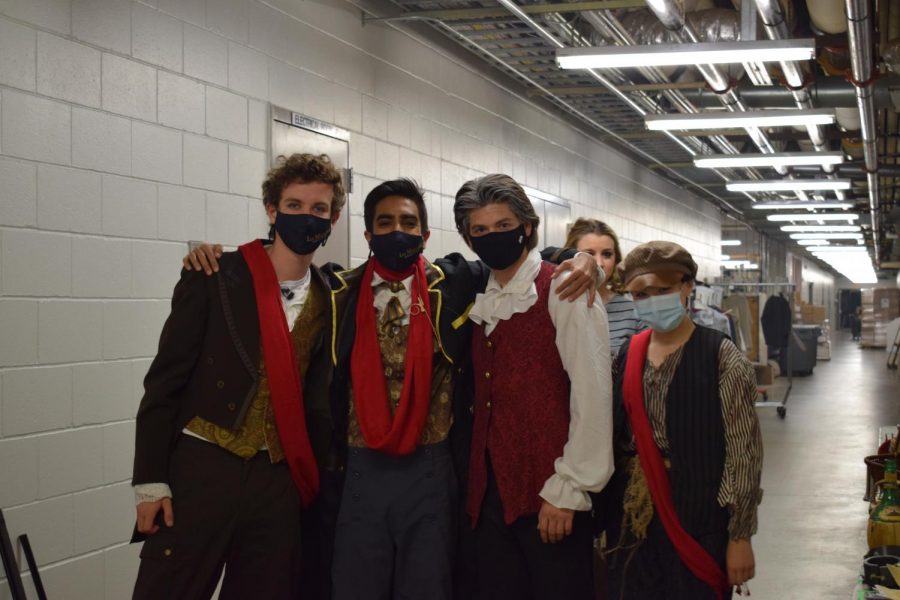 While the majority of school clubs and activities are being held online this year, the Eagan High School Theater Department found a way to debut their newest musical, Les Misérables. In choosing which performance to premiere, stage manager Ella Janky reported that, “[The theater department] wanted to have a show that showcased our school’s vocal talent.” The play is chock full of extravagant musical numbers and tells the story of Jean Valjean, a 19th century french peasant looking for redemption after his time in prison. The show is set during the French Revolution and stars Graham Zemke, as Valjean, and Finn Wallce, as Javert and showcases a broad range of talent.

While this year’s production process may not match what is traditional, it came together in its own way. Chorus member Zakir Naqvi shared that, “For a show of this size, we would usually have a cast of 40-50 people. The stage is only big enough to fit 36 people safely spaced out so that became our cast number.”

After the switch to distance learning, many of the usual theater features had to be altered or abandoned all together in order to remain safe. “Since we switched to digital learning, the band couldn’t be present and we had to use vocal and instrumental tracks instead. Obviously that’s a big step down from a live band but we were eventually able to memorize the way that the recording played,” cast member Evelyn Gore, who plays Epionine, explained.

The show took numerous precautions in order to remain COVID safe. From social distancing to extra masks, Eagan High School was determined to put on a show safely. “At the beginning I wasn’t going to do the show because I was really nervous about [COVID],” Gore admitted. “But after I talked to Ms.Cherner, she reassured me that in order for this to happen, we all had to follow the rules. I mean, we often double masked which is really hard singing if you were wondering.”

“Directors were very clear that this is our little pod, do NOT go to a party with a bunch of people,” Tech member Elle Bishop elaborated. Gore describes that various vocal rehearsals were done from home, and conducted from the safety of zoom. It’s clear the Eagan High School theater department was clear about their COVID rules and took as many precautions as possible.

As expected, many challenges arose while producing a musical in 2020. “This show was very different in many ways. Mainly the blocking. Rather than face each other and sing, or interact physically on stage, we actually sang to the audience,” cast member Finn Wallace said.

“We had a lot of light cues and a lot of projections so those took a little while to integrate into the show. There was definitely an extra amount to compensate for the fact that we didn’t have a lot of stuff going on onstage,” said Bishop. Gore expressed that, “since we didn’t have an audience there was like zero closure,” saying that when the actors took their final bow, “we just kinda stood there and froze since we’re so used to audiences clapping for us. We were kind of confused like…is that it?”

Along with challenges, Les Misérables was also a production filled with connection and accomplishments. “The biggest success was that the show happened while still complying with CDC guidelines and being safe.” Naqvi said. “It’s not an easy feat to perform a show like Les Mis even without a global pandemic.”

“This was the most song heavy show I have ever done, and honestly, it was amazing. I’ve never felt so connected to a show or the people in it,” says Wallace. Janky added to their points, stating that “We all grew so close because we all were having a hard time this year, so having a safe place where people could perform, even if it looked different, was amazing. We all have been searching for something to look forward to, and Les Mis was definitely that thing.” Bishop agreed, admitting that it was “nice to be back with everyone working towards a common goal and working on a big project.”

Students overall cherished the opportunity to create something spectacular during these uncertain times. Many cast and crew members shared why they encourage you to purchase a ticket for viewing:

“We all made so many sacrifices to make this show happen. It’s such a powerful show and there’s a lot of parallels between the show and what’s going on in the world today.” -Evelyn Gore

“I think people should buy a ticket because I think the fact that we managed to do this show will make people happy. Our community will see that there is still hope for a safe future and they may find the motivation to keep pushing through this. No matter how bad the world may seem, or how broken it seems, there will always be people who are committed to making something good.” -Finn Wallace

“No one can take away our music: even though the experience was modified, we found a way to put on a show. It means a lot to me.”  – Julia Peterson

“I mean come on, Finn? Graham? You gotta listen to them.” – Cooper Swanson

Beginning December 12, tickets for Eagan High School’s production of Les Misérables will be available for purchase on the EHS website for online viewing.