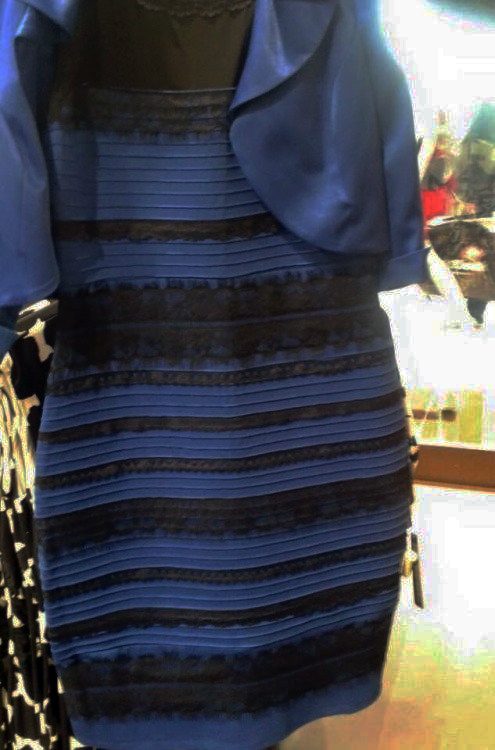 The dress. You know the one. The dress that sparked raging debate, took over the internet, and distracted the world from actual important matters, all with one simple question: Is it black and blue, or white and gold?

The questionable colored dress became an internet sensation after a frustrated Tumblr user posted a picture of it, saying her friends couldn’t agree on its color. The response became viral, and the dress took the spotlight.

Celebrities on Twitter also pooled into the conversation. Taylor Swift tweeted that she thought the dress was some type of trick, and that “ITS OBVIOUSLY BLUE AND BLACK.” Kim Kardashian, on the other hand, who saw the dress as white and gold, tweeted “Kanye sees blue and black, who is color blind?”

Well Kim, neither of you are. There are several plausible reasons that the dress, which has been confirmed to actually be blue and black, appears different from person to person.

The first possible reason: The dress may look different depending on the screen with which you are looking at it. The differences in brightness, color calibration and resolution can create huge visual differences.

The lighting in the room at the time may also affect the way you perceive the image. Different light sources throw off light of different colors. Sunlight is very yellow whereas shade casts a bluish hue. This changes the color of light reflecting off an object and into your eye.

If you look at the photo, the lower right is very yellow and the upper right is very blue. Our brain struggles to process the image, and is only able to perceive one of the color combinations.

The number and distribution of color receptors, or cones, in one’s eyes also affects how a person perceives color. Only 35% of the human population has a fourth cone in their eyes, and that allows them to see color more accurately. It is highly probable that people who have an additional fourth cone did not get tricked by the blue/black dress, or white/gold, no matter the background light.

There are also several versions of the same picture floating around online, and it could easily be a question of which picture you’re looking at.

The debate has long died down and the world seems to have moved on from the dress. Although people may still hold to their opinions, one thing can be agreed upon: The dress debate was quite the pointless phenomenon.