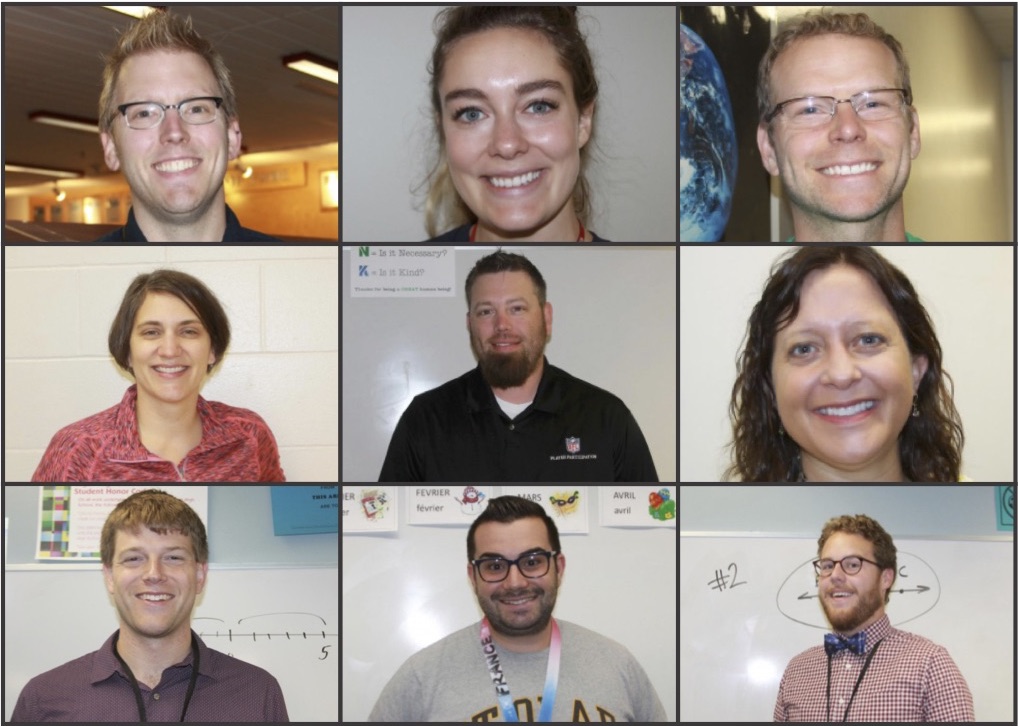 This school year, Eagan High School welcomed not only the class of 2021 but ten new teachers.

Ms. Amber Tesdall is a new teacher in the science department and focuses mainly on teaching chemistry. She taught for two years in Illinois and one year in Wisconsin before taking a 12-year break to raise her children. While she hadn’t been a teacher at Eagan, she tutored math, science, and ACT prep for four years, and two of those years were spent in the EHS guidance office. “It’s really nice because I’ve been a part of this community for so long, and I know a lot of the kids and the staff, so I knew I wanted to be here,” Ms. Tesdall explains. Currently, she isn’t a part of any activities but hopes to be in the future. “Eventually I want to be involved in coaching, but as of right now I love supporting the kids in their activities,” Ms. Tesdall elaborates.

Also joining the science department is Mr. Bill Haight, a physical earth science teacher. He graduated from high school at Henry Sibley and double majored in geology and environmental science at the University of Wisconsin-Eau Claire before receiving his master’s degree in teaching from the University of Minnesota. Prior to teaching at Eagan, Mr. Haight taught at Washington Technology Magnet School in St. Paul for 15 years. “Two weeks in, I love Eagan High School, the students, and the staff. I couldn’t be happier,” he says.

Joining the social studies department is Ms. Olivia Rodriguez. Along with teaching, Ms. Rodriguez is also one of the National Honor Society advisors. She graduated from the College of St. Benedict in 2015 and student0 taught in central Minnesota. She then taught at Totino-Grace High School in Fridley for two years. “Eagan’s a lot bigger than what I’m used to. It’s [about] three times bigger than the last place I was at,” Ms. Rodriguez laughs. “It’s surprising to see that it’s such a tight-knit community despite the size, which is really nice,” she adds.

In addition to Ms. Rodriguez is Mr. Tim Owen. Mr. Owen taught for 11 years in suburban Milwaukee and relocated to Eagan after his wife, who actually attended Eagan High School, got a new job in the Twin Cities area. In the past, he coached boys’ volleyball, basketball, and track. “Compared to my last place, [Eagan] is much bigger,” Mr. Owen elaborates. “But I can tell [Eagan] is a pretty special place with a great culture of learning,” he concludes. This year, Mr. Owen is teaching geometry, algebra 2, and algebra 2 concepts.

Mr. Owen isn’t the only new math teacher at Eagan. Mr. Jordan Stevens is joining the math department as well. Mr. Stevens, who grew up in Woodbury, attended the University of Wisconsin-Eau Claire and graduated with a math education degree in 2016. Before getting a job at Eagan, he student taught in River Falls, Wisconsin. “I want to make more people like math and make more people excel in math,” he explains. In addition to teaching geometry and intermediate algebra, Mr. Stevens coaches girls’ tennis and potentially boys’ tennis in the spring.

Besides Mr. Stevens, Mr. Michael Pearson is joining the instrumental music department. Mr. Pearson attended the University of Wisconsin-River Falls. Before coming to Eagan, he taught for two years at a school in “the middle of nowhere-Minnesota” and six years in Fridley, which is essentially northern Minneapolis. Mr. Pearson was initially attracted to Eagan High School because of its jazz band. He confides, “One of the reasons I applied for this job is because they have this killer jazz band.” He goes on to add, “Overall, the music department here is so great. The kids are super talented, really nice, and there’s a lot of support from the school and the community.”

Mr. Hanson also joined Eagan High School this year. He was a teacher in the Shakopee school district for two years and in Farmington for two years as an in-school suspension teacher. Now, Mr. Hanson teaches English to 9th and 10th graders. Along with teaching, Mr. Hanson is also a head coach for the football team. “I hope to be a successful English teacher, and I hope to turn around the football program to make us more competitive,” Mr. Hanson explains.

Last but not least is Mr. William Kvot, who teaches French. Mr. Kvot, who is originally from France, graduated from the Université d’Avignon in 2012 with a degree in French literature and a minor in teaching French as a second language. Prior to coming to Eagan High School, he taught for two years in Phoenix, Arizona. Along with teaching, Mr. Kvot plans on helping out with the French Club. The French teacher confides, “Everyone has been so nice to me: students, teachers, administration, and parents.”