We are not racists? Prove it 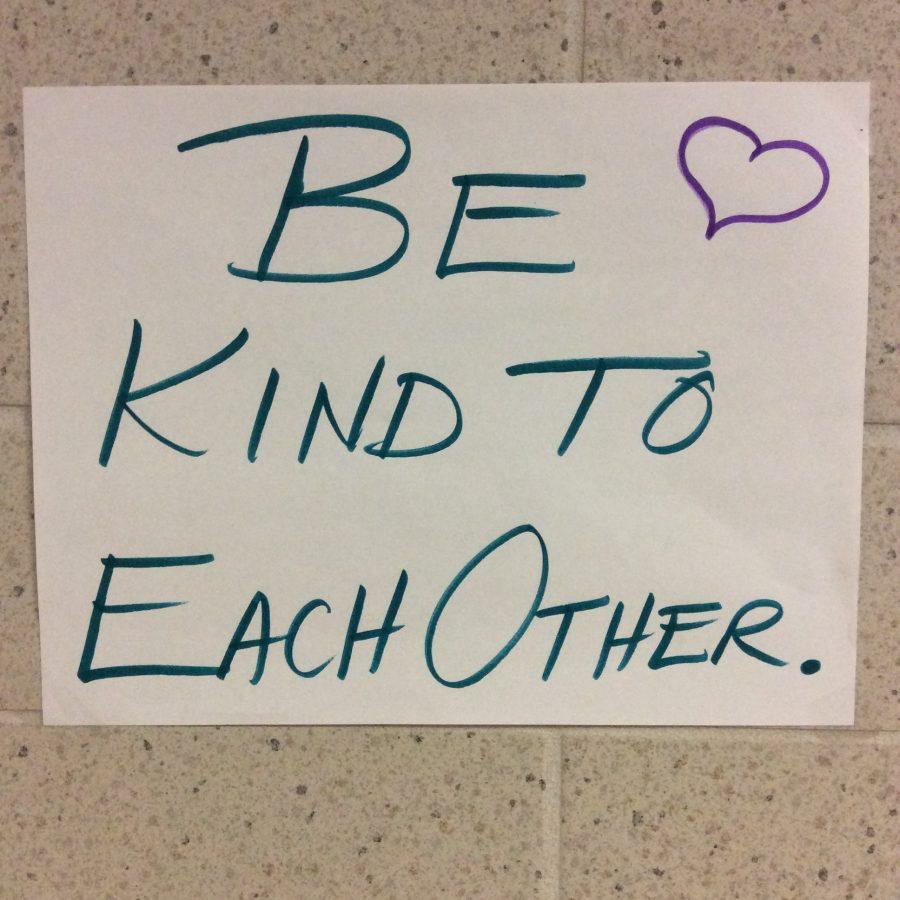 One of the many kindness posters that began to appear in the hallways last week. This one is located by main floor locker bay bathrooms.

The last two weeks have been especially difficult for our school community. On election day, a student showed up with a Confederate flag attached to a vehicle. The day after the election, there was talk in the halls of “the wall” and a student was told to “go back to Mexico” (the student was actually from Puerto Rico, a U.S. territory). Last Thursday, Fox 9 reported that “KKK” had been scratched into a white student’s car after she brought a person of color as a date the Homecoming Dance. Ignorant and offensive tweets were hurled between students as online conflict over the election escalated. A Snapchat caption threatened violence on Monday, November 21.

We don’t believe these actions represent who we are. If they do, we, the students, need to be the first to confront it.

All students deserve to feel safe walking the halls, attending class, working with others, and participating in school activities. Intolerance and discrimination don’t just violate Eagan’s school policy, they are in direct opposition to our moral beliefs. No one should feel targeted by their peers in the building or at school events. Despite recent incidents we do, for the most part, feel safe. The actions of a few, while concerning, do not represent the entire student body.

So what eases our distress despite the fear and intimidation into our midst? Positive messages posted in the hall and on bathroom walls. A strong showing at the first discussion club meeting. Teachers taking class time to open up the dialogue. Dr. Reikowski addressing the students and e-mailing parents. The administrative team dealing with individual issues including those above. The common decency and courage of students who defend their peers against harassment, even if it may hurt their reputation.

These actions help. So does education, communication, and taking responsibility for our actions and words, in person and on social media.

Crying “Free speech!” or “First Amendment!” does not justify the incidents we’ve been dealing with. Student free speech rights stop when the words intimidate someone else according to the Supreme Court. From there harassment becomes bullying or verbal abuse; both violations carry suspension punishments according to the student handbook.

In order to strengthen our community against the issues of the last two weeks, we each must encourage open communication between students, teachers, parents, and administration. Talk to the people in your PAWS and the people who sit beside you in class. We’re willing to venture that the more you know their stories and they know yours, the more our school will embrace our diverse perspectives. Rather than ranting on Twitter or sending Snapchats to friends, report incidents of intolerance to teachers and administrators when you witness them and give specifics; better yet, intervene when it’s happening and stand strong by others’ sides.

We are the sum of all of our actions – good and bad. We are better than this. We are Eagan.