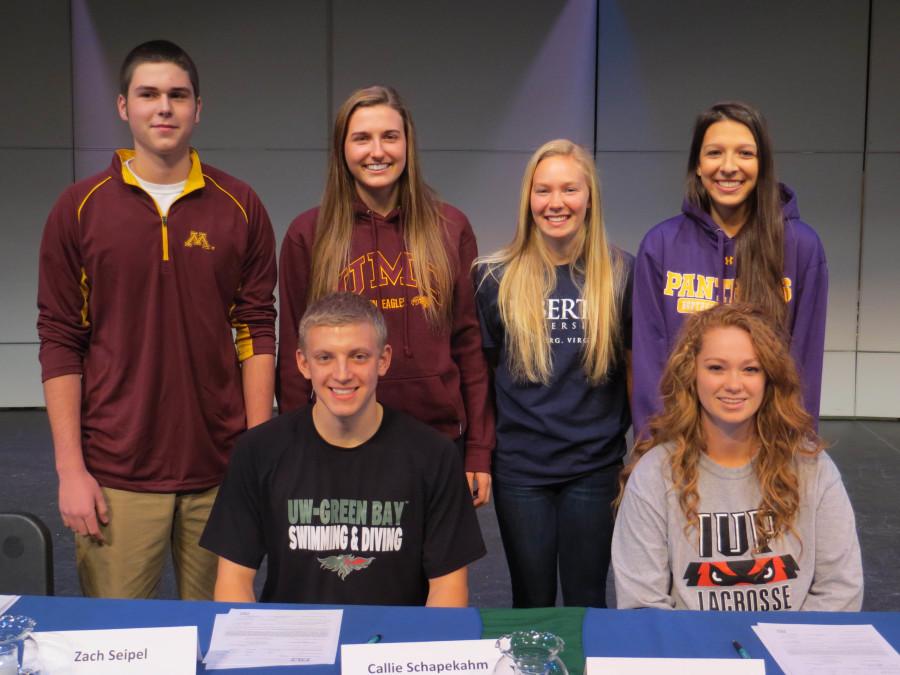 While the fall sports wound down, some seniors spent the time to recall the memories of their high school sport careers, knowing it was the end. Six students in particular, however, did the opposite: they looked ahead to their future in college sports. Seniors Maddie McNeil, Callie Schapekahm, Abby Gaedtke, Eli Broman, Anna Van Wyk, and Zach Seipel all signed their National Letter of Intent on November 12, signaling the latest wave of Wildcat athletes taking their talents to the next level.

Coming off an impressive second-place state finish, volleyball player Maddie McNeil chose to sign with the Northern Iowa Panthers. Claiming she “fell in love with the campus … and the great education program,” McNeil, who hopes to study “education with a secondary in math,” selected this D1 university. It could only help that UNI offered coaches she could only describe as amazing, along with “great athletics” in general. Maddie is graduating early, and will be enrolling as a Panther in their next semester.

McNeil was joined on the stage by fellow volleyball player Callie Schapekahm, who will be attending University of Minnesota-Crookston. Enticed by the university’s “strong academic program,” one that offers her desired field of health management, it didn’t hurt that Crookston offered the small-school feel that she wanted. The athletic program, however, is what caught her attention. Regarding the coaches, she stated: “I really liked the coaches, they were really straightforward with me and told me everything: what I needed to work on and what I needed to do.” One thing that isn’t offered by Crookston, however, is the PIT, the fan section that Callie said she would miss most in leaving Eagan’s athletic program.

Moving from volleyball to girls’ lacrosse, Abby Gaedtke was the next Wildcat to sign her letter of intent. Choosing the Indiana University of Pennsylvania, Abby made it seem like it was an easy decision. Describing the campus as “amazing,” the lacrosse program as “perfect,” and the coaches as “the best,” it was clear to see that she is confident that she made the right choice. Joining a team that is ranked nationally, she’s excited to “get to play for a team that’s so good.” In IUP she plans on studying special education, eventually following up with rehabilitation.

Another enthusiastic signee is one of the two males of the group, swimmer Eli Broman. Broman has decided on the University of Wisconsin Green Bay, largely because of its perfectly-sized community atmosphere. More specifically, Eli said: “It really seems like a big family, the coaches were very kind and they just wanted me to be included in what they were doing there, and explained about how their team is connected and how they spend time together,” explaining that this camaraderie was a big reason for his decision. He will be studying chemistry, and, luckily not become a Packers fan despite his proximity to the Green Bay NFL team.

Along with volleyball and girls’ soccer, girls’ cross country also made a strong run into State, led by signee Anna Van Wyck. Anna will be attending Liberty University, a decision that did not come easy to her. Originally not a school she had in mind, she only toured it because her father was an alum. Quickly, however, she noticed the “really friendly” people, and she changed her mind, starting to picture herself going there. The beautiful views, as the university is in the mountains, couldn’t have hurt.

Finally, baseball player Zach Seipel has chosen to play for the University of Minnesota Crookston. Citing its strong health care management program, which he plans on entering, its smaller size, and its good campus in general, Seipel also mentioned the fact that they will be getting a new wellness center. Coaches have proved to be most important to him, as he brought up Crookston’s new coaching staff as a positive deciding factor, as well as saying he’ll miss the coaches at Eagan when he heads off to college.

Fall sports may be over, but Eagan’s athletics are nowhere near finished. As players prepare for their future, some sooner than others, more athletes are looking to continue their career into college. For now, it’s time to celebrate the achievements of these six high-performing students.