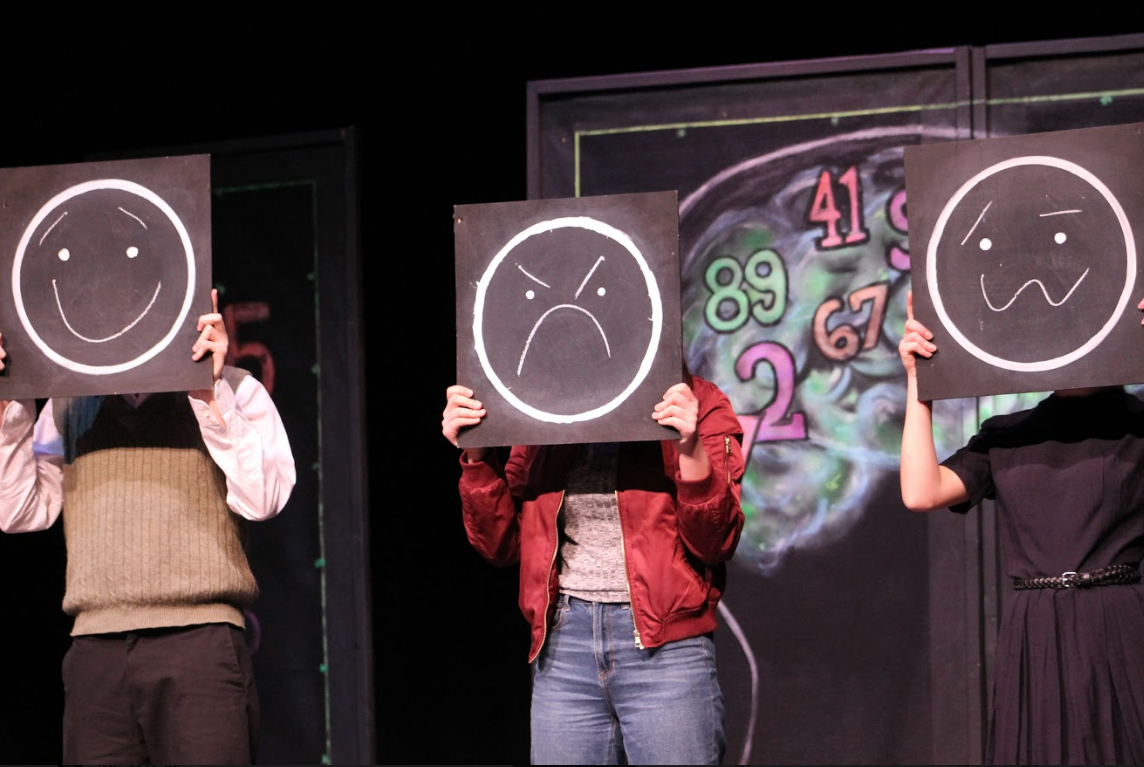 [slideshow_deploy id=’8329′]The Curious Incident of the Dog in the Nighttime, this year’s One Act, has begun a busy week of performances. On January 23, they qualified at section prelims to compete Wednesday, January 31, in section finals. If they advance from there, they will go to state.

The play is based on a British novel by Mark Haddon, and was later written for the stage by Simon Stephens. The story centers around a teenage boy with autism, Christopher Boone. As he investigates the murder of his neighbor’s dog, he makes a journey of discovery about his family. Christopher’s role exposes the different forms autism can take. Ethan Estrem, who plays Christopher, clarifies, “He can still function, except he has a hard time finding his own way… instead of having a speech difficulty, he has a social difficulty.” Christopher also struggles with nervous tics and people touching him, behaviors that can be incomprehensible to others.

Lizzy Kleis, who plays Mrs. Alexander, an old neighbor lady, confronts the challenge of talking to Christopher in a way that he will understand during the play. People with autism “can’t pick up on some of the social cues a normal person would be able to,” she explained.

People with autism have such a different perspective and you never even think about it.”

The set also lends insight into Christopher’s mind. Lights and sound effects are integral parts of  the show. A black light on glow paint is used to illuminate panels that remind of Christopher’s mathematical brain. Estrem emphasized the importance of the lighting in this one act. “Two LEDs onstage…represent when we’re in Christopher’s imagination or in his head,” he described.

The cast performed on Tuesday for all English classes at EHS. They also have a public performance coming on Feb. 1st. That night, before and after the performance, there will be a symposium with experts on Autism Spectrum Disorder (ASD) to answer questions. Kleis expressed, “I think that a lot of times autism is seen as oh, there are people who are different than us so I’m just going to shut it out and ignore it,” but she hopes the One Act will help people to see it differently. “People with autism have such a different perspective and you never even think about it.”